To start the tour fresh and rested, a friend and I traveled to the Hotel Bellaval in Scuol the evening before the first stage. The head of the house, Thomas Schulze, informed us after check-in about the exact course of the next days. We had already received the GPS data for the tour in advance. During a delicious dinner as part of the Bellaval half-board, we then strengthened ourselves again extensively for the next days.

After a restful night, we dropped off our luggage for the shuttle the next morning (a ritual that was repeated daily) and helped ourselves to the rich breakfast buffet before the start of the tour. Towards Sur En we were able to "roll in" for the time being. From there up into the valley we went in the direction of the Uina Gorge. Before entering the gorge we stopped at the alp Uina Dadaint. There we had local products and something against the small hunger and thirst. The short rest there did us good! Because then it really started. Pushing and carrying was the order of the day, but the panorama was unique. In the rock and in the tunnels (partly with ice moraines) the path meandered ever upward. At the top you were released into the plain of Alp Sursass. Super idyllic on flowy trails it went on over the border into Italy, towards the Sesvenna hut. Here there was everything to fill up the empty memories before you drove down to Schlinig. This mostly on gravel or forest roads. Later it went along the slope on picturesque forest and meadow trails towards Prämajur, where we took the chairlift up to the top station. After a cappucino, the tour led us further towards Pfaffensee and - very trail-heavy - to Haidersee. There we cycled, following the GPS, along the Reschensee to Nauders to the Hotel Central. Here our luggage was already ready, which the shuttle from Scuol had delivered. After the shower we received tips for the next stage and current GPS data, because the original route had to be adjusted due to road works. Everything had worked out wonderfully and the dinner was very fine! We relaxed with a nightcap beer before we finally went to sleep.

After a hearty breakfast, we set off the next day for the Bergkastellbahn. On this day was namely something "shutteln" announced. Here you could buy a day ticket for the upcoming shuttle (3x). Arrived at the top, it went, in Enduro style, already down again. So a spring travel is not wrong!
Down we drove around the Reschensee and on to the Piz Belpiano Bahn. From there it went, on mostly created routes, above the Reschensee along also already again down. Finally, we reached the circulating railroad, with which we went back up. Always on trails in the slope we cycled towards Brugger Alm, where we had a great meal. Further we went up in the forest until Prämajur.

Then began the brutal climb to Tellakopf via Laatscher Alm, where actually almost all the altitude meters of the 2nd stage were completed. Down to Taufers, the route is technically very demanding, with pushing passages at S4 - places. Back in Switzerland, following the river via Müstair we drove to St. Maria to the Hotel Schweizerhof. On the sun terrace we enjoyed another isotonic beer, before we took an excellent dinner in a great hall. Also the breakfast the next morning, left nothing to be desired.

Today there were "only" about 1,000 hm in the roadbook. Therefore, we asked ourselves whether we should not drive up from St. Maria to the Umbrail Pass. Fortunately we discarded this idea and let a local bus driver drive us up (service has to be booked at the reception the evening before). The CHF 20.- was well worth it. The pass never stops and there were still many alpine trails waiting for us. So we started directly in thin air. But first we enjoyed the beautiful panorama.

We rode on crisp trails, always below Piz Umbrails, to Bocchetta di Forcola (2760 m.a.s.l.), further - partly over small snowfields - to Bocchetta di Pedenolo (2760 m.a.s.l.) in an unreal but magnificent and impressive landscape. After a while we reached a kind of walled forest road, which was built in the 1st World War for the supply of troops. At the beginning still superflowig on meager meadows, the way became then ever more precipitous and stonier. At the end, it went down serpentine and the altitude fell only so there. (Be careful that you don't tumble yourself, it's damn steep).

At the bottom we reached the Val Forcola. The landscape is very beautiful and seems somehow Canadian. After circling Lago di Cancano, we stopped for a rest at Rifugio Val Fraele. A wonderful place with excellent food and drink. After the rest we went over the dam into the valley, which leads to Passo Trella. Quite nice, but also quite steep, especially after the meal! From the pass we went down to Lago di Livigno and on to Livigno itself, to the hotel. For us, we did not go to the actual hotel of the tour, the Lac Salin, but for organizational reasons to an alternative hotel in town. This one was very okay. From the Lac Salin and its amenities, we have heard only good things and are looking forward to the next time to visit there.

After a hearty breakfast, we drove through the village to the Mottolino mountain railroad. At the top we first went over winter slopes and then flowing up and down in the direction of Alpe Mine. At the end of the valley, in the Agriturismo Alpe Mine, we took a coffee and ate something. Very tasty!

We took flowy trails over snow and scree fields down to the valley where the climb to the pass Forcola di Livigno begins. Always within sight of the road, but still a bit off the beaten path, we kept going up. At the end, serpentines led upward, which brought the pulse then but very much up to speed. At the top we stopped at the restaurant Foresteria 2315, where we had another very good meal. Afterwards it became again alpine steep. Directly at the border tree we drove up on the trail and lost ourselves again in beautiful landscapes.

After a while and some snowfields we saw the Hospiz Bernina and the two lakes (Lago Bianco and Lej Nair). There is also the watershed between the Adriatic Sea and the Black Sea. From then on it was all downhill. Mostly on easy to ride meadows and paths, always along the Bernina railroad.

Shortly before Morteratsch it became rough again. So be careful! Finally we reached Pontresina, from where we took the train to Scuol to pick up our luggage and start the journey home. Before leaving Scuol, we were able to enjoy some great Capuns on the terrace of the Hotel Bellaval. 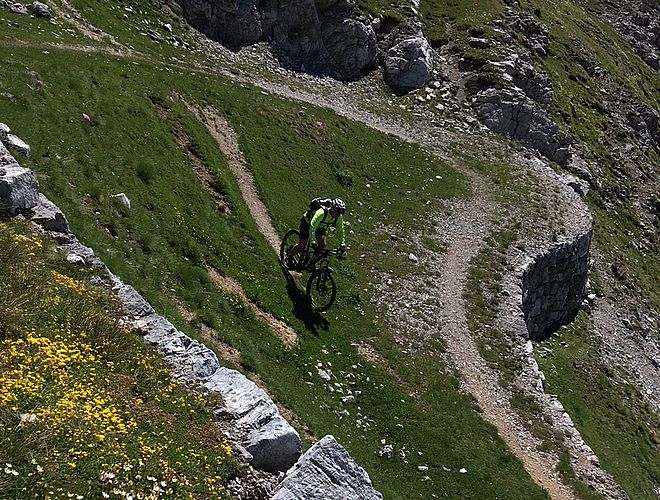 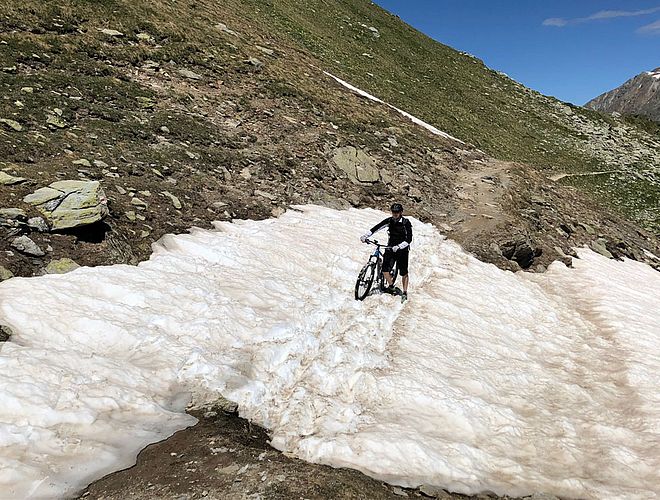 The three-country tour - in our case the single trail variant - is a lot of fun, is well organized and you are well looked after. The hotels are all different, but all very good in their own way. The luggage transport works, the food is good, the staff motivated and helpful. The laundry and bike service is very convenient. We found the tour planning good and the trail portion is right. Also the wellness offer can be seen. In addition, there is always the possibility of adapting the tour according to the shape of the day if necessary (tour A / B / road).

The package is so absolutely right.
We highly recommend the tour and would definitely do it again. 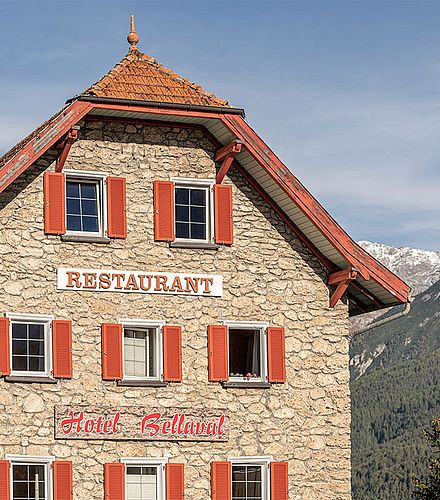 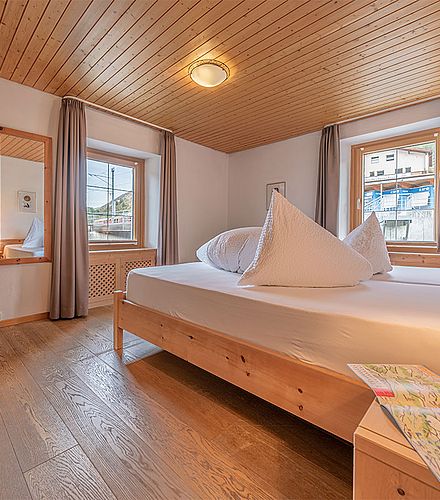 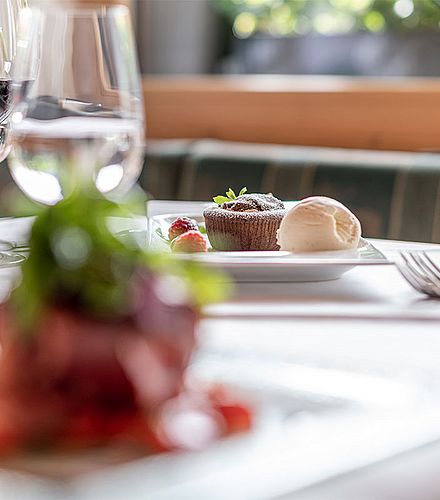 Do you have any questions?

WE WILL GLADLY INFORM YOU ABOUT DETAILS AND OFFERS

AND SUPPORT YOU WITH YOUR VACATION PLANNING!

This website uses cookies. Those have two functions: On the one hand they are providing basic functionality for this website. On the other hand they allow us to improve our content for you by saving and analyzing anonymized user data. You can redraw your consent to using these cookies at any time. Find more information regarding cookies on our Data Protection Declaration and regarding us on the Imprint.